Food Addiction Is Real, And This Is What It’s Like

Uncategorized
Food Addiction Is Real, And This Is What It’s Like 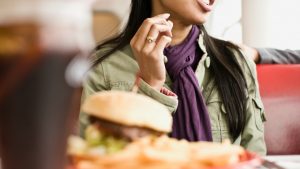 Yes, I said “addicted,” and no, I’m not trying to be funny. I only wish this were a joke. But the truth is, food addiction is an actual condition, and a serious issue, and it affects more people than you probably realize.

This is my life, every freaking morning.

I wake up, completely resolved that today is the day I’ll break the cycle. No binge eating. No sugary foods. No eating my feelings.

Today there will be whole grain cereal and fruit! There will be fresh greens and super foods and lean proteins! I’ve got this. I’m Super Woman!

By 10:30am, I’m definitely not Super Woman. I’m super agitated, is what I am. I grab a handful of cashews and continue running errands, but by lunch, my resolve is already crumbling. Then a stressor hits. The pediatrician calls, and I forgot an appointment. Or the preschool calls, and there was an “incident” on the playground.

That’s when the proverbial cookie crumbles. Before I know it, I’m in line at Starbucks, ordering a quadruple Venti sugar bomb with extra caffeine, and a muffin. All it takes is one stressor, y’all, and I’m so far off the wagon, I need to call a taxi.

And yet, this little slice of my life hardly represents the entirety of my addiction. I’ve been addicted to food for 15 years, and my struggle manifests itself every single time I am stressed. If my marriage is rocky, I turn to food. When the holidays are upon us, I turn to food. If I’m up late at night trying to make a deadline, food is my long-suffering companion.

It’s possible that, if we met, you wouldn’t believe I was a food addict. My brain is that of an addict’s, but my body doesn’t betray that secret. On the outside, I’m a very average American woman. I’m overweight, but not obese. I exercise regularly. But the dysfunction in addiction has nothing to do with the quantity of the drug — but rather, your relationship to it.

When I feel a compulsion to eat, my mind obsesses over the craving until, eventually, I give in. As I’m consuming my favorite foods, everything stressful disappears. I become a happy human being, riding a high that solves all the world’s problems. That is, until I’m done scarfing down that last morsel and the self-loathing kicks in.

What goes up, must come down, after all.

Does any of this sound familiar to you? Maybe it is.

In a recent study performed at Yale, scientists determined that 5% of the American population is currently addicted to food — and far more (up to 20%) are considered “almost addicted.” I told you that it affects more people than you likely realize.

This is not a small number, folks — it’s huge, but it doesn’t come as a surprise to me. After all, we are biologically predisposed to seek out calories.

You see, early humans had no idea where their next meal would come from, so they developed an evolutionary drive to find nutrient-dense foods. When they found a food source, they would eat as much as possible. It was an instinctual matter of survival, and that instinct was passed down to us.

Fast forward a couple bajillion years to the toxic food environment we live in now. There’s a drive-thru on every dang corner with a plethora of caloric sustenance ready to be devoured. Combine this food accessibility with the human default setting of “go forth and eat a ton,” and it’s no wonder 15 million Americans have such a pronounced struggle. Not to mention that — spoiler alert — eating is fun and food tastes good.

And yet, a stigma still surrounds food addiction. It isn’t taken seriously because, in the minds of many, food isn’t an actual drug. Therefore, those who struggle with addiction are told to buck up, Buttercup — and maybe join Weight Watchers. We hear things like “it’s just an excuse for laziness” and “it’s not that hard to stop putting food in your mouth” because America loves fat-shaming.

Well, not only are those notions ridiculously unsympathetic and mean-spirited, they are also flat out wrong.

In a scathing New York Times expose on the food industry, Michael Moss wrote, “It’s not just a matter of poor willpower on the part of the consumer and a give-the-people-what-they-want attitude on the part of the food manufacturers. What I found, over four years of research and reporting, was a conscious effort — taking place in labs and marketing meetings and grocery-store aisles — to get people hooked on foods that are convenient and inexpensive.”

Yes, you read that correctly. Much like Big Tobacco, the modern food industry (Big Food?) has transformed something natural into a vessel of destructive health consequences. The only difference between the two is that people don’t have to smoke tobacco. But, they sure as hell have to eat.

Humans are genetically wired to seek out nutrient-dense foods. But these foods are being altered by companies to target our brain chemistry, facilitating addiction. And this addiction leads to a myriad of health issues, both physical and mental. With co-morbidities, such as obesity and heart disease, it’s possible that food addiction is one of the deadliest emerging illnesses.

Isn’t it time we take food addiction seriously? (And hear me now, bullying, shaming, and blaming will help no one. Don’t take that route, please.)

As somebody who suffers, I certainly think so. And I hope you agree.