A Quick Look at the Steady Evolution of Time Lapse Photography 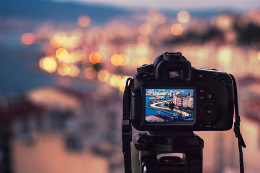 Time lapse photography is a cinematographic technique in which each frame of the picture is captured as a much lesser speed as compared to the speed it will be played back. This in turn gives an effect of the picture moving much faster than it actually is. This effect can be termed as the lapsing of time, hence the term ‘Time Lapse’ photography. It was first used by Georges Melies in his motion picture, ‘Carrefour De La Opera’ in 1897. It was later used by F. Percy Smith and Roman Vishniac till 1918. This technique was also used extensively by feature films called Bergfilms. Most notably, it was used in ‘The Holy Mountain’ in 1926.

Time lapse was generally used for films about biology and science, and mostly used in sequences of plants growing, flowers opening, and fruits rotting. It was also used in sequences of a building being built, or people moving around in a city.
To understand the working of time lapse, one would have to know a bit about filming and photography. The general speed of moving film is 24 frames per second. If the camera is set to record at a speed lower than 24/s, the speed of projection will still be 24/s. Therefore, the image will be seen moving faster than it actually was. The frame rate of the camera can be set to any difference, starting from the normal 24 to 30 frames per second to even one frame a day.
Therefore, time lapse photography is a series of photos taken over a large period of time, shown together and assembled into a movie. Time lapse technology was later used extensively by Dr. John Ott and later by the Oxford Scientific Film Institute In Oxford England. Though this technique started as a hobby for Dr. Ott, he later started building more and more time-lapse machinery and gadgets. Dr. John Ott was devoted to this technology and had come up with wonderful examples of what time lapse technique could do. He also wrote a book about his experiences, titled ‘My Ivory Cellar’. He had shot his entire greenhouse and the other cameras in the greenhouse. Dr. Ott also shot movies of plants moving and gyrating to pre-recorded music using time-lapse technology. His work was later used in documentaries like Walt Disney’s ‘Secrets of Life’ in 1956. Since then, time lapse photography has been used in countless television programs and movies. Recently, shows like the Benny Hill Show has used time lapse photography at the end of every of their episodes. Recently, the movie ‘A Zed and Two Noughts’ by Peter Greenway had used a subplot featuring time lapse.
Perhaps time lapse technology was most used in the 1995 plants documentary, ‘Private Life of Plants’ by David Attenborough. Until a few years ago, the costs of shooting with this technique was enormous and therefore out of the common man’s hands. However, today the same effect can be created with the simple equipment of a digital camera, a computer, and proper movie editing software. Some cameras also offer time lapse software, generally called ‘remote software’.
A simple way of taking a time lapse photo is to set the camera to focus the object, set it to take a photograph every three or five seconds, and get the photographs. The photographs can then be put together in a movie-editing software. The sequence of pictures should run at the speed of one frame per second. For better results, you can focus on the clouds, a flower opening, or even people moving along on the street. Make sure that the object and the action is big enough to be noticed.
Related Items
Uncategorized